When I first heard about Moss and Quill I knew in the back of my head there was something about a mouse in Virtual Reality. Then the screenshots and gameplay came and finally we had a demo on the PlayStation VR Demo Disc 2. Even with the screenshots, gameplay and the demo, I held back…I had to. Not because I didn’t want to see this for myself, but I didn’t want to be spoiled about the magic of this adventure. And I can say that I am very happy that I waited because Moss from Polyarc Games is just that, magical. 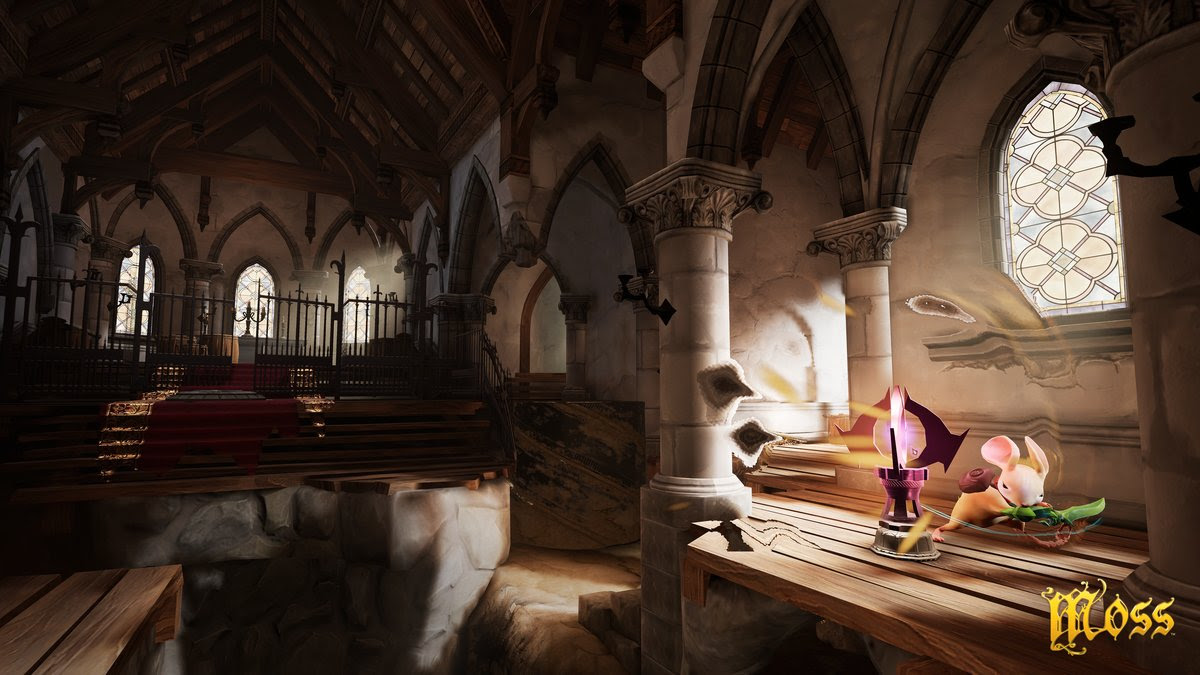 Moss stars our hero Quill. I am saying this now, I want to go to the pet store and find a mouse just like Quill, that’s how special Quill is. When you first start Moss you are in this hall if you will, with a book of Moss. Now before I go any further, I have to point this out. When you look around this hall and even beginning the story, look around and just appreciate the amount of detail that went in here. Sometimes we are so eager to start an adventure, that we sometimes forget the beauty of our surroundings and the whole reason why we go on adventures.

Moss starts as I would hope. A tale of a land, the evil that has overcome that land and our unlikely hero to travel across the land as she must save her Uncle and defeat the evil darkness that has disrupted the land. Once you are transported to this world, the magic somehow gets more magical. It’s like you are shrunk down and instantly you feel the size of this place. Trees seem bigger, clouds seem darker, birds who would normally not bother you, now seem to be circling around as if they want you for dinner, and animals seem like giants. 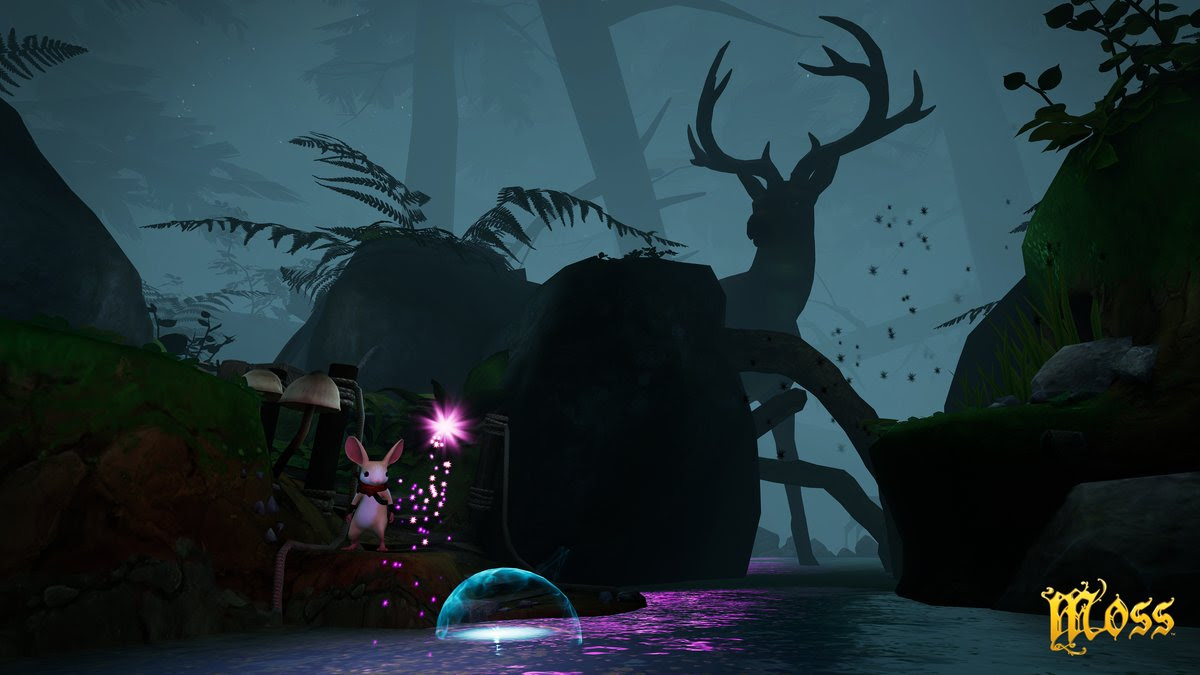 You play as a reader who is this being and when you first see yourself by looking at the reflection in the water makes you stop for a second and just move your head in amazement. You will be using the DualShock 4 controller where you will be able to move Quill to jump, swing your sword, climb and evade. The controls work very well here. You will notice this orb like presence in front of you. This is also controlled by the Dual Shock 4 controller and used to move large objects, heal, and interact with Quill. Now go ahead and pet her, you know you want to.

Now seeing Quill in the town with animals and creatures on her level works great and is a very immersive experience in VR. Something that even with me writing this, cannot be fully appreciated and to maybe even some, not even explained how immersive it is. This land…this world…you are brought to its level in this way that it makes me want to just live there. The world is so peaceful. Hearing the water in the background is so calm and relaxing, that I spent a good 10 minutes just closing my eyes with my PSVR headset on and just appreciated the escape. 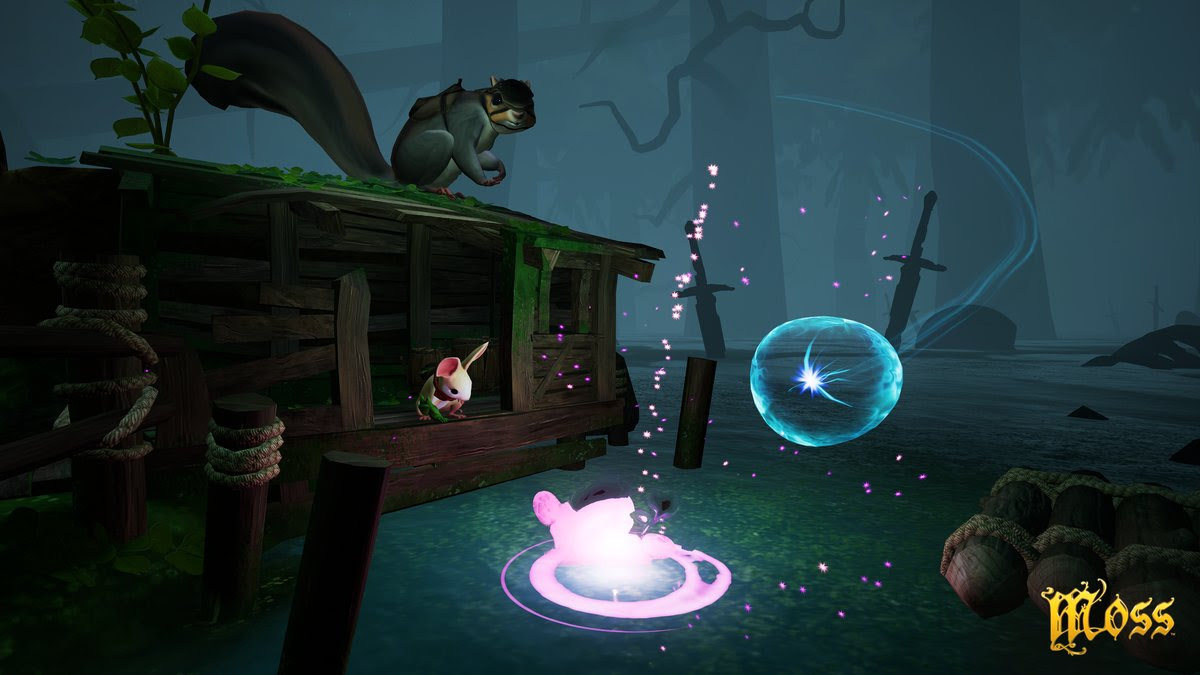 Earlier I mentioned I wanted to go to the pet store and get a mouse just like Quill. It’s not just because of when I first got a glimpse of her back when Moss was announced, but it’s also the way Polyarc Games has her move and react. From her feat of strength as she pulls herself up to walking and running around to the shaking off of water and even when Quill dies (the first time I got her killed I felt sadness and just wanted to scream nooooo), it just all is so smooth. So thank you Polyarc Games…thank you for giving as much life to Quill as you did to the world of Moss.

Moss is an action adventure game. So that includes fighting and puzzles. The puzzles are well done. Some will have you saying that is easy and some will make you think. Remember to think like Quill from Quill’s perspective. You might be surprised, but its that level of thinking that will help you here. If you get stuck on a puzzle, don’t get too worried because Quill will help or at least point you the direction you need to go. This friendship between Quill and you at this level of scale is something special that from start to end, you will really appreciate the companionship. Moss really has something for everyone. Adventure, combat, puzzles, friendship, and even the world itself. The narration is spot on and just pulls you in and not wanting to look back, but yet somehow makes you remember the beauty of what you and Quill already have. When a game is played in VR it allows us to escape, but when that game allows us to escape within the escape, that is something special. It just goes to show that sometimes the biggest heroes come in the smallest packages.

Moss is out now. A review copy was provided. To learn more about Polyarc, please visit their site (that also includes some must-have Moss items for sale) and also like them on Facebook and follow them on Twitter.

In case you missed the trailer, please enjoy. Until next time, I am going to go visit Quill.