Time only moves when you do. These words could not be more true with SUPERHOT VR from The SUPERHOT team has finally come to PlayStation VR and this is a very good thing. Since this is a PSVR game, grab your headset and the two move controllers, because you will be shooting guns, punching, using swords, and throwing ninja stars. 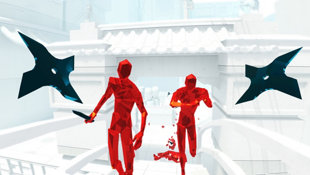 One of the many things that I appreciate about this game is it doesn’t play the same way twice. The levels are broken down into sub-levels if you will. If you die on one of the sub-levels, you have to start that round again. That can either be frustration or it might be time for a break. I know at one point I got a little frustrated and not in a bad way and I decided to go all Billy The Kid on them and died and I had no one to blame but myself, but I did it with a smile. 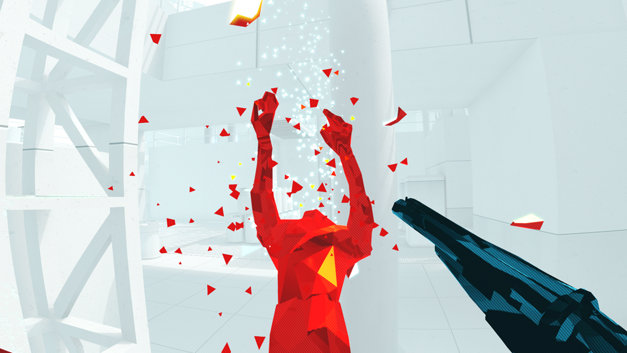 When you hold your hands up, time stops. And this is awesome as you can see bullets fly by in a frozen way. Move your hands slowly and I felt like I was in the Matrix. Some levels you may see a vase or a ball and yes you can pick those up and throw them at the enemies or use them to defend yourself against a bullet. In fact, any weapon you have in your possession can be used to deflect. But I will say that it is truly satisfying in slow motion to throw an object at a guy who has a gun only to then have him throw his gun in the air and then you catch it mid-air to then fire at the enemies.

With a puzzle like a twist that is coated with an FPS mind, is like bringing a bottle to a gunfight at high noon. The Red enemies or maybe they are the Men In Red, either way, their only job is to take you out and you are not going to let that happen, are you? No, you will use whatever means are necessary to win. And I appreciate that I never felt powerless in whatever situation I was put in as I had time on my side. And at times, time was against me. I felt more power using an ashtray to defend against a coming shot only to throw a vase and a ninja star to knock out the Men In Red.

With the 18 levels of play, the slow motion matrix fighting to the variety of style that SUPERHOT VR brings to not only the game but your abilities as well makes this a must-have for PlayStation VR. There is honestly nothing like it and depending on how you play, you may work up a sweat. The dodging, hand movements, tracking all work extremely well here. And hey, when you shoot someone and they fall back into the glass which breaks in slow motion, that has that Hollywood moment you only see in movies.

SUPERHOT VR is out now or you can buy the non-VR version each for $24.99. There is also a bundle that includes both for $39.99. A review copy was provided. With all that is said, SUPERHOT VR is in a class by itself that needs to be experienced and deserves your time on the PlayStation VR.

To learn more about SUPERHOT VR please visit the site and follow the SUPERHOT team on Twitter @SUPERHOTTHEGAME. In case you missed the trailer, please enjoy.

Until next time, I am going to try to go back in without firing a single shot.

8 thoughts on “SUPERHOT VR – The Review”